The importance of postcards lies in their function. As artifacts of a material culture they are products and creations of a specific time in society. Pre-WWI, they are mass produced media that transfer ideas, thoughts, taste, and establish a connection with another. The Universal Postal Union rectify laws which made postcards the cheapest form of postal mail to send and receive. 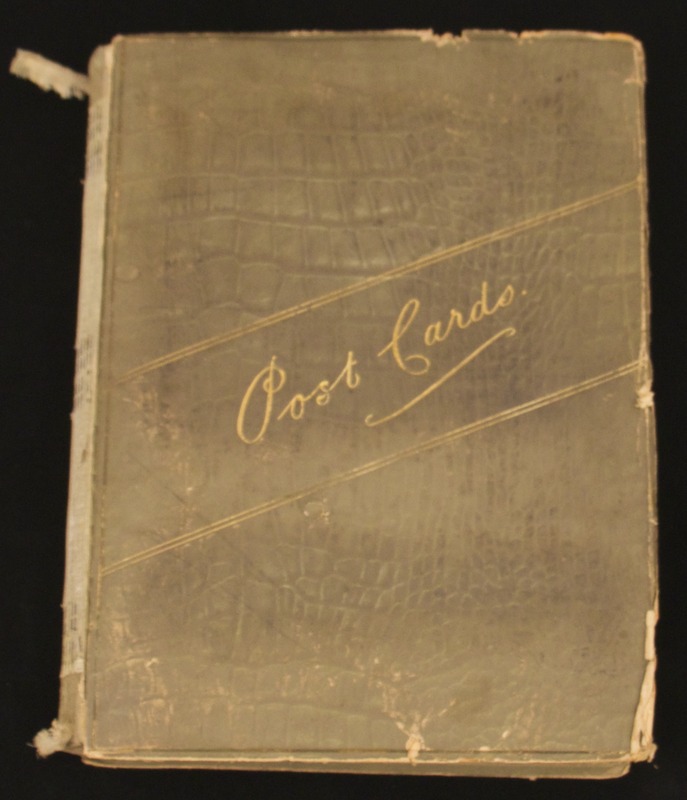 Kinnear postcard album collected and received from travel's in America, and Europe in 1908-1909. Postcard album's were popular during these years much the same way a photo album's are today. During the early twentieth century, postcards were more inexpensive than photos and were considered prized family possessions that would be located in living rooms to view, and show off.

This exhibit builds upon ongoing efforts by humans to actively amass specific objects and cultivate a collective memory. The postcard craze that swept the world responded to desires for collecting commodities, like colorful images, and was made possible because of new technologies and production processes. As a result of industrialization in the second half of the Nineteenth century, postcard production helped expand mass communication and mass tourism.

Interestingly, much literature regarding vintage postcards references women as integral collectors of this period. This could have resulted because of a new middle class that could afford to collect non-necessary objects, and had increased leisure time to do so. This also demonstrates that postcard collecting, and socieities that formed around the hobby occurred in tandem with a new, modern comsumer culture promoted by the middle class.

Originally completed in 1897 by Ernst Giese and Paul Wiedner, this station connected Dresden to Berlin, and supported the industrialization of Germany at the beginning of the twentieth century.

The visual side of a postcard showcases pictures or photographs that clearly demonstrate the unique-ness of a locale, thus it’s own brand. Typically this is in the form of cultural landmarks or achievements. How a locale chooses to market itself to the rest of the world demonstrates an important trend in postcards, to be used for tourism purposes. Postcards operated as a visual and literal way to remember a specific site, person, or object of assumed importance. Additionally, photographic postcards reveal increasing industrialization within America and Europe. Many of the cultural landmarks featured were relatively new.

On verso, of "A View of Dresden Train Station", shows notes made, a stamp, a postmarker, and address on an undivided back.

The backside of postcards shows the stamp, postmarker, address, and short text box to communicate brief messages. To accurately date the postcards within this exhibit, mainly those with a notated dated (postmarker, written date, or publisher date) were used.

But, the date can be gleaned on unused postcards. For example, in America after 1907, laws required that postcards have a divided back, which allowed for an address, and short message. Additionally, between 1872 and 1917, laws required American postcards to be mailed at a rate of 1 cent per postcard.

The ability to cheaply and efficiently communicate at an increasingly quicker rate was the driving force that propelled postcards to be the most popular form of communication for a time. Postcards that feature stamps and a postmark are considered more valuable than unused ones, and combines two of the most popular hobbies; stamp collecting, and postcard collecting on one backside.